Yesterday I cooked. Furiously. I came back from 8 hours of multitasking on 2 photocopy machines—I could live without ever seeing the button “properties” again—and needed to calm down. For the most part, the kitchen is generally my safe haven. The sun was still out, so as someone who’s working on their food photography skills, I jumped into action. I managed to take most of my photos before it got dark, and I tinkered around with the poor man’s photo shop (Picasa) to get some editing ideas. A fun and delicious evening. Hints and tips are welcome!

We’ll start at the end. Yesterday I felt like eating dessert first. I found a really awesome recipe on Pinterest a few weeks back for raw vegan chocolate mousse (there are so many floating around with varying ingredients) and decided that just had to happen. If you haven’t ever had raw vegan chocolate mousse…you just have to. That’s it. End of  story. It’s so decadent and not that bad for you, which are all good things in my book. Technically this particular mix isn’t 100% raw vegan (it’s more like 98%) because we use honey, which some vegans do not eat because it may harm bees, but it’s pretty darn close. If you want to go the full monty, soak some Medjool dates (or any dates, I suppose, but you can find those at a local co-op) in water for at least 2 hours and that will be your sweetener. At the last moment, sprinkle some berries on top and enjoy. I took the pictures in a pretty cup, but I’ll be honest and let you in on a secret. I actually ate some of it out of the food processor. Blade and all. My justification: it saves on dishes! 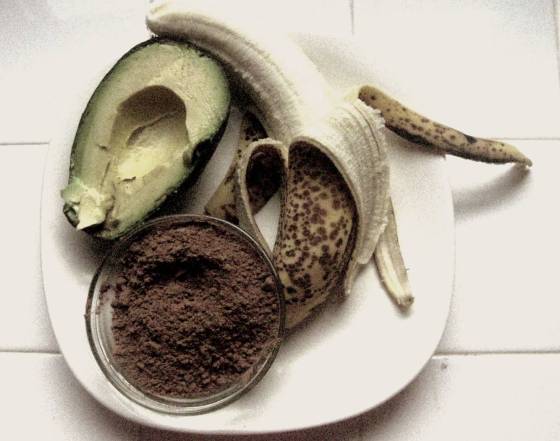 I won’t lie. The banana is mildly suggestive. PG-13. 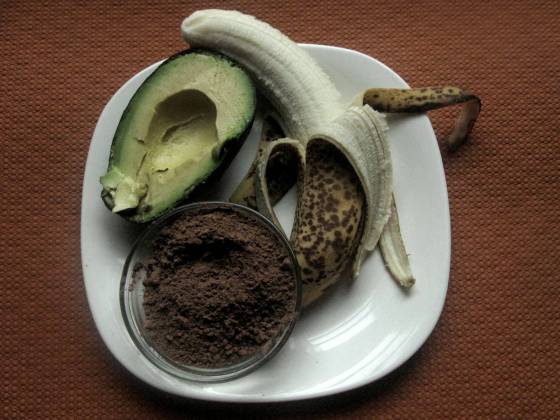 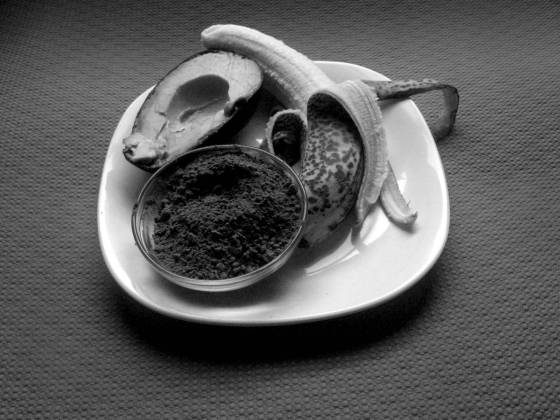 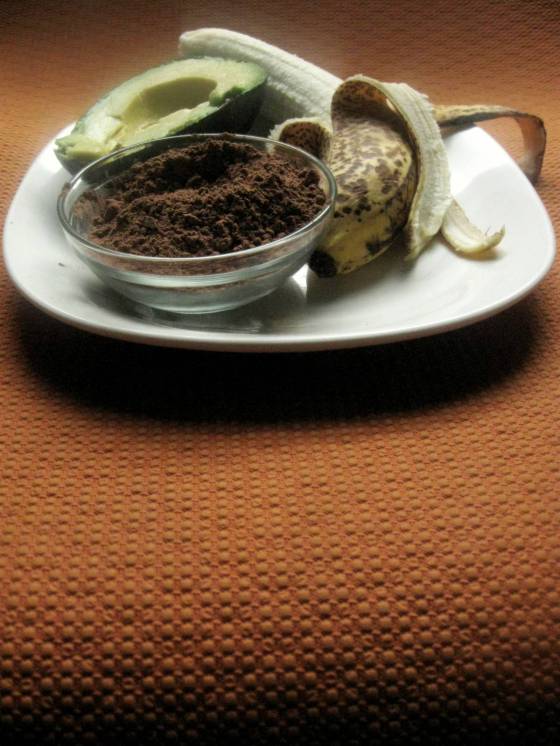 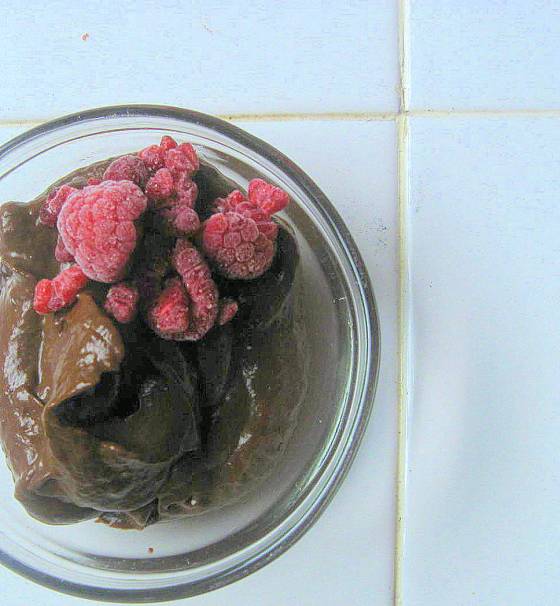 I then decided my night needed a more visceral angle. My response was to grill up some red meat. Now when I take the time out to buy steak, which only happens once or twice a month, I go all out on the prep. Maybe it’s a rub, or a glaze, or both, but I very rarely slap it onto the grill and say “there.” My delicious mousse needed an equally delicious mate. I married my love off all things balsamic and coffee rubbed (although I don’t actually like to drink coffee) and found this delicious recipe. I only had plain balsamic and olive oil, but I used the other spices. Trust me, I don’t have flank steak money (a close cousin to McDonalds money), but I was able to turn this okay cut of meat into something delicious. For a side I made something I call: lazy man (or woman) “guac”. Slice up ½ an avocado, ½ a Roma tomato, and sprinkle with garlic sea salt flakes. No need to mash (unless you want to.) Bon appe-yum-yum. Note: I took this photo so you could have an idea of what I was eating. It got a little dark out by the time it was all said and done. 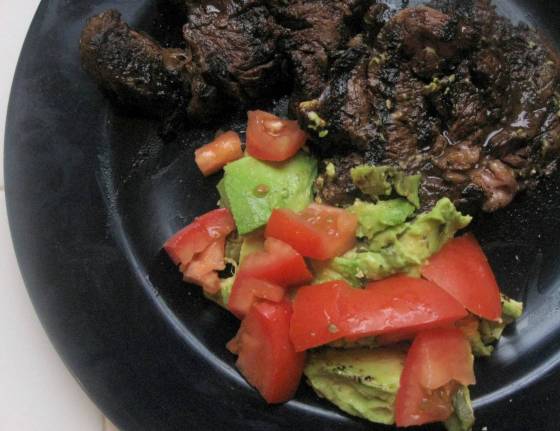 And finally, to tie everything together, I decided I needed a stiff drink. During my last week at Goodwill I bought a Cocktail book, which has proved to be most useful—or perhaps most wallet breaking, as time goes on. 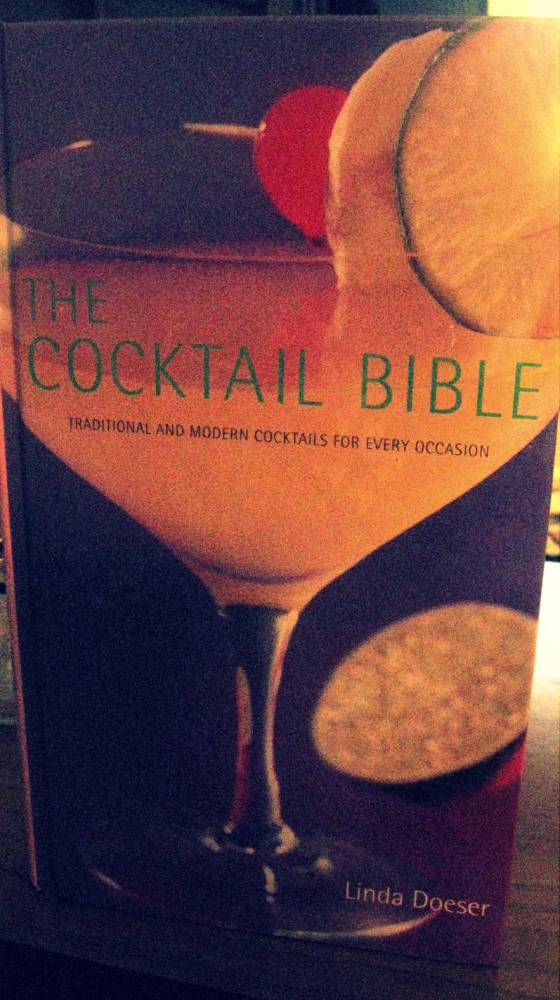 My SAT reading comprehension skills are really coming in handy.

I guess we shall see. I found a recipe for a frozen daiquiri, so I made one from scratch and not that bottled stuff! I admit, it was a little strong, but prepared drinks aren’t necessarily something you should guzzle down. Nope, they need to be savored. Raw vegan chocolate mousse? Well, that’s another story. A very messy story. 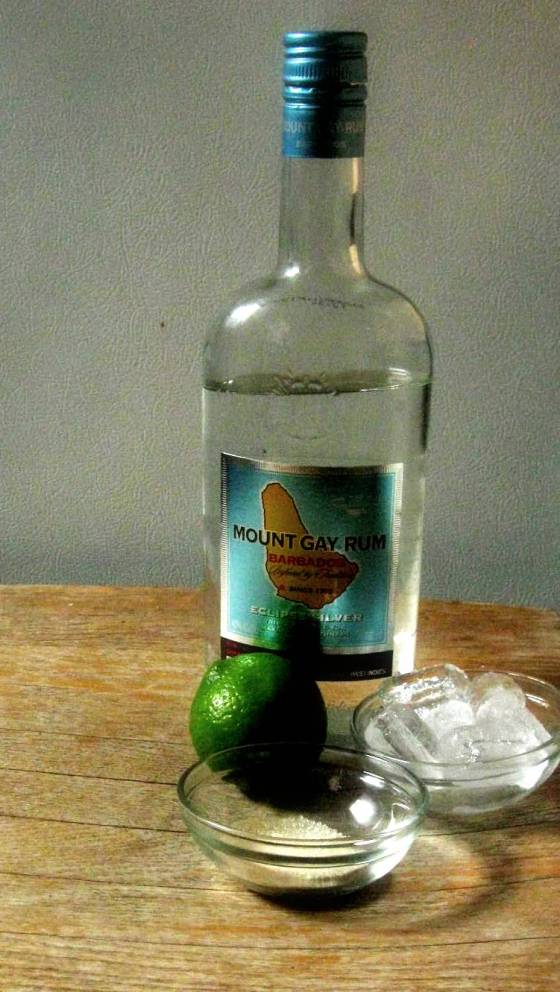