Okay, so I’m admitting my poor taste in movie watching choices with this anecdote, but it has to happen. Who here has seen Jeepers Creepers 2 (“spoiler alert” ahead)? If you have you know the scene at the end where decades later the dad is sitting, with a shot gun, in front of the Creeper he has crucified to his barn, waiting for it to come alive so he can stop it from wrecking havoc on the mid western plains?  Well, that is sort of how I’ve been with a dairy intolerance. People with gluten issues also have a tendency to notice that dairy causes them the same discomfort, so I’ve been sitting with my imaginary shot gun waiting for the day when yogurt, cheese, and milk mutated into an untouchable food group. I’ve had an inkling for the past few months, but it was all made crystal clear yesterday after I drank a most delicious Nutella Smoothie. 20 minutes later I was hustling to the bathroom and soon I realized I needed to cut my afternoon with the ladies short and be in the comfort of my own apartment. Not cool. The familiar hand pain, nausea, and bloating was apparent, as well as the lack of desire to nibble on much. I fell into bed and took a long nap. This morning I didn’t feel great either and decided to call out of work and hope the stomach pains and feeling of inflammation in my body would subside.

A little stir-crazy from not making anything to eat, I decided to work my homemade beauty recipe magic in the kitchen. For weeks I’ve been looking for a lilac toner recipe and only came up with a very simple one. I decided “hey, I cannot mess up that badly” and decided to try my hand at making my own toner.

1 Tbs of Apple Cider Vinegar—you need to use the organic kind that has “the mother” (aka visible strains) if you want all the benefits. Braggs ACV is one of the most popular and the smallest bottle they say is only $3.50!

While water is boiling pop the lilac flowers off the stems and place in bowl. Next grate a knob of ginger over the bowl. When the water is done boiling pour the 1 cup over the two ingredients. Add in the ACV and let steep for 10 minutes (this is a great time to catch up on e-mails or any dishes in the sink you’ve been avoiding.) After 10 minutes, strain into another bowl and throw away the remnants. Add in the small amount of vegetable glycerin and mix with a spoon. Then, carefully, move the final product in a glass jar for storage. Chill in refrigerator. 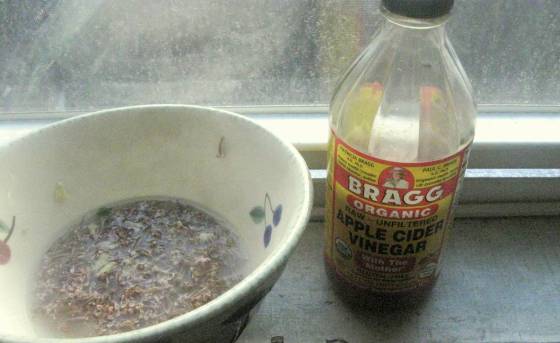 Compared to what you buy in stores the amount of liquid left over won’t seem like much, but since we are using all natural products we cannot store it for months. Ideally it’s best to find a friend to split the bounty with. When making skincare products with food (think avocados, strawberries, bananas, etc) people usually suggest using everything up within a week. With recipes like the one above, that feature more liquids, I’ve seen suggestions to keep anywhere from a week to one month max. Use your best instincts after a week by frequently smell checking. Also, ACV may be too harsh for sensitive skin types, even when diluted.  If you are concerned feel free to leave the ingredient out or do a skin test on your hand.

Even after one use I could tell I enjoyed this toner more than the green tea one I made a few months back. My face felt a lot more refreshed and I think the ACV helped pick up even more dirt and impurities. Plus the color is pretty awesome. Oh how a terrible yesterday lead to a most glorious morning.