I spend a lot of time in my kitchen. Like. A lot. Id say at the very least 7 hours a week. That’s pretty impressive for a college student! It’s where I bring together breakfast, lunch, and dinner. I also log in some time scraping dishes, which is the less glamorous side of eating, though it does allow me time to  catch up on some Netflix watching. Last weekend I decided to make some raw vegan strawberry ice cream. It was delicious, which I knew it would be, but I was super surprised with how Martha Stewart I went with the presentation. Damn, it could have been featured in some home making magazine. See for yourself!

It all started with some cute little strawberries who had their eye on some bananas that were giving them the frozen-for-24-hrs-in-the-freezer shoulder. 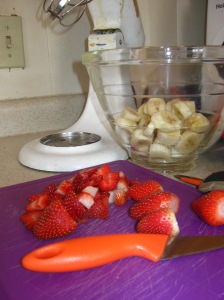 But they had a plan, which involved me whipping out the food processor attachment of my Cuisinart blend stick. How awesome and transformer like is that?!  Blennnderrrrrr activate! 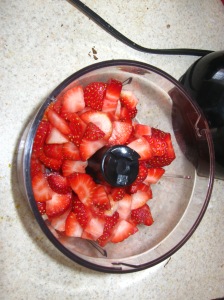 After a thorough puree job, the strawberries were starting to feel saucy ❤

...starting to feel saucy, much like Rosie Huntington Whitley in Transformers. 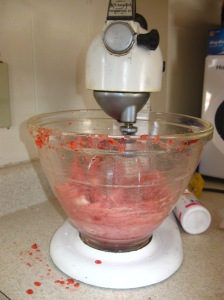 Uh-oh! Cinnamon wanted to get in on the action. Hey, this is a PG-13 page! 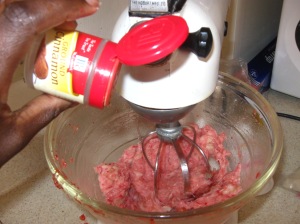 After some quality time in the bowl, the three ingredients settle down in some awesome wine glasses. 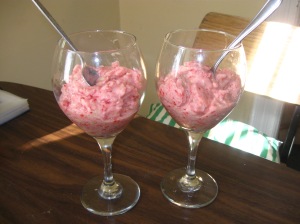 This ménage-a-trois was not incident free.  A splooge of epic proportions!

All smart cooks wear their “whatever” clothes in the kitchen!

4 bananas. Slice and freeze for at least 8 hours. Up to 24 is fine, though. (Slice before freezing to make your life easier)

A dash of cinnamon.

Easiest thing ever. And it’s just strawberries and bananas, so you can totally eat this for breakfast.